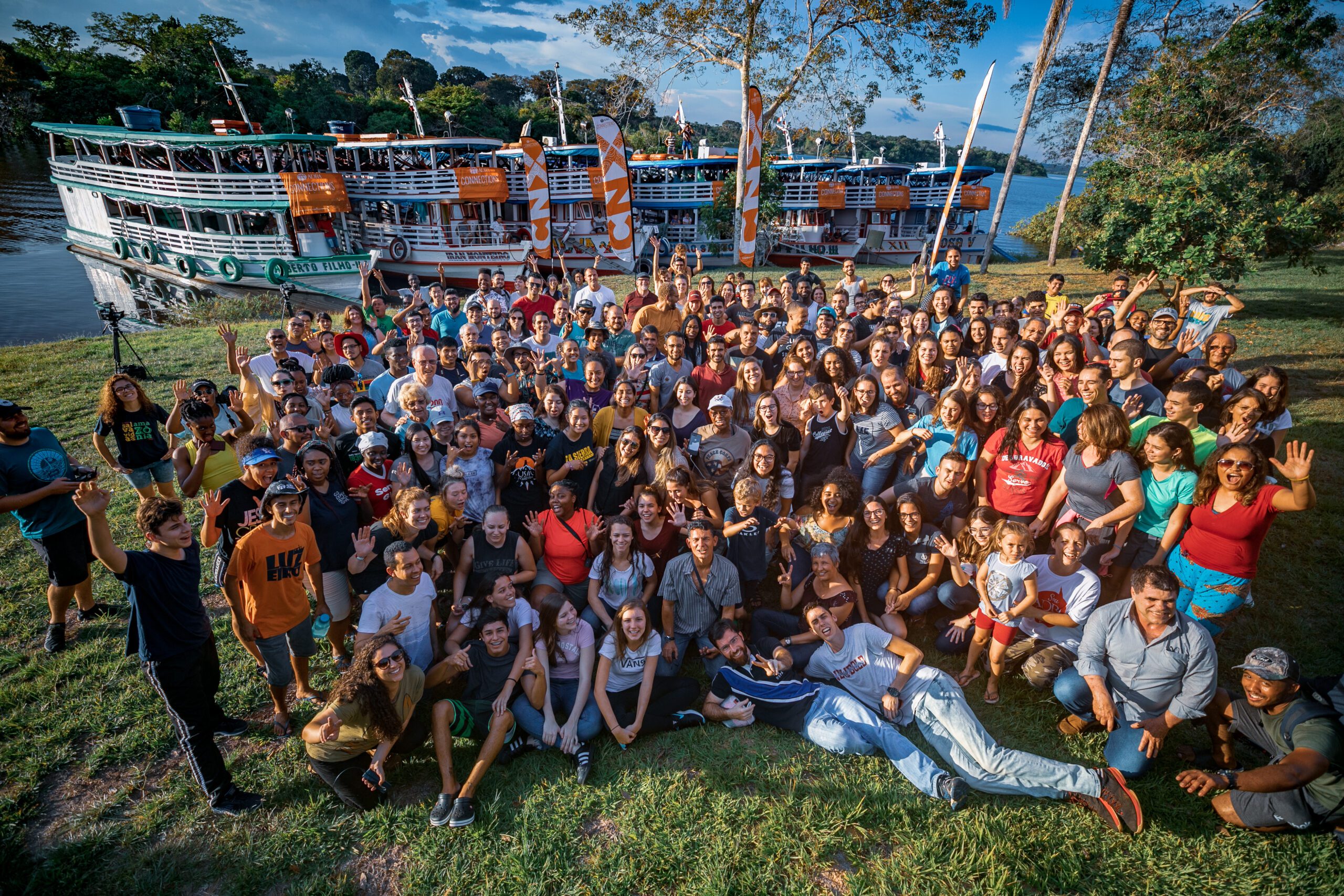 This article was written by Kimi-Roux James and was published online by the Columbia Visitor Magazine on July 31, which highlights the mission trip to Brazil that took place from July 8-22. One of our Kettering College students is featured in this article.

More than 220 university students across North and South America took a break during the summer, and traveled miles from home to ensure that underprivileged children earn a higher education. For two weeks, students participated in the Adventist Development and Relief Agency’s (ADRA) new volunteer program called, “ADRA Connections,” to assist in the construction of the Adventist Technical School of Massauari (ETAM) in Brazil. The school has an enrollment of 45 students, ages 5 to 14, who previously received no education years before.

Joel Barajas, a recent graduate from Walla Walla University in Washington, heard about ADRA Connections hosting a volunteer trip in the Amazon, and knew he had to sign up. “When I heard about a trip to the Amazon, at the time I was drifting spiritually, and needed something to rejuvenate my faith,” says Barajas. “Hearing about young people building a community was something I wanted to experience, and though I didn’t know how I was going to pay for the trip, I told everyone I was going.”

More Than a Mission Trip
Launched in July, ADRA Connections, operated by the faith-based humanitarian agency ADRA International, is comprised of hands-on projects that currently cater to and engage university students willing to help communities most in need. “Though ADRA Connections sponsors the trip and projects, student volunteers fundraise themselves to cover traveling costs, this in turn helps make the ADRA Connections program accessible and sustainable,” says Adam Wamack, ADRA Connections manager.

ADRA Connections Extreme trips like this one involve larger scale construction and community development projects, encourage student volunteers to learn about different cultures while connecting with local dwellers, and serves as an avenue where students develop new friendships.

With so many student volunteers from numerous universities coming together for this monumental event, each had one thing in common—students came to serve.

“I wanted to come on a volunteer trip and never had the opportunity,” says Raiane Porto, a music education major at UNASP in Brazil. “This year God said it was time, and since February, I planned and saved so I can go to the Amazon.”

“I am from New York and I am not used to getting my hands dirty, but I wanted to come and help others,” says Mark Walton, a pharmacy student at Loma Linda University in California.

Experiencing the Jungle
When students arrived in the city of Manaus, Brazil, they quickly became immersed in the rainforest territory. From the airport to the school, students piled into seven boats to ride from Manaus down the Amazon River, which lasted 30 hours. The only way to get to ETAM was by boat.

Once at the school, students had no Wi-Fi or phone connection, relied heavily on bottled water, faced intense heat, and slept in hammocks. “It took me by surprise how the indigenous people lived. Their houses have no insulation, and they use water from the river to drink and bathe,” says Deborah Kim, a human biology pre-med major at Kettering College in Ohio. Kim wants to be a medical missionary and saw ADRA Connections as a way to get that first-hand experience. 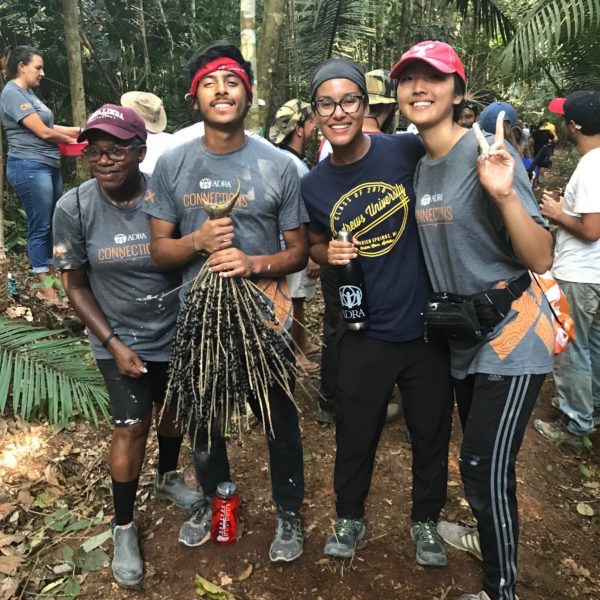 Deborah Kim (far right) with other students during the mission trip to Brazil with ADRA Connections.

Students worked tirelessly from dawn till dusk assisting with construction, putting up telephone poles, placing tiles on the floor, and painting. During breaks, students had fun swimming on the beach, playing with pink dolphins, meeting local villagers, and going on a nature walk.

“Meeting new people was what I looked forward to when I signed up,” says Tayler Dixon, a communication student at Oakwood University in Alabama. “We’ve been doing a lot for the school as well: building houses for teachers, painting, putting tiles down, putting windows up, wiring electricity, and helping out with kitchen duties, like cooking.”

“We also worshipped every day, and it helped me to reflect on the bigger purpose for our hard work, and that was we did this for the kids,” says Ashton Harden, a business management and legal studies major at La Sierra University in California. “Education is important, and the kids deserve this school,” she added, “I didn’t realize it before but by building a school for them we are impacting their lives and they in turn impact us.”

Birth of an Amazon School
The construction of ETAM initially started seven years ago when villagers from the New Jerusalem community shared their need with mission leaders for a bigger school. “At the time, 20 children were receiving lessons in a small room and one of our staff members named Poliana on ADRA Brazil’s team taught them,” says Daniel Fernandes, a nurse by trade and founder of the school. “But the class grew as parents saw that the children being taught were able to read and write. Of course, holding them in one room wasn’t sufficient and more classrooms were needed.”

In 2015, the first two classrooms were built, thanks to more than 30 mission groups who helped. However, getting aid to construct the school became a hurdle. “We thought it would take 10 years to build the school, but when we got in touch with ADRA Connections to aid us with volunteers, we saw God working and knew we could build the school sooner,” says Fernandez.

Grand Opening for ETAM
On July 20, the school complex was finished, and an inauguration ceremony dedicating the school was held. Earlier that week, the 45 ETAM children were able to attend school at the new complex. Once they stepped into their newly built and freshly painted classrooms they were in awe of the new books, chairs and desks. “It’s an unexplainable feeling; the kids had dropped jaws when they saw their new classroom,” remarked Gabriela Dos Santos, a teacher at ETAM who works with students ages 4 to 6. “I also think the houses for teachers are beautiful. It’s a joy to see something so well done.”

“We are truly thankful to everyone for their time, effort and money to help put this school together. ETAM would not be possible without you,” says Poliana Peixoto, ETAM’s principal who served as the school’s first teacher and now oversees six teachers.

The school complex also came complete with a new library, cafeteria, five houses for missionary teachers, an urgent care clinic, a chapel, and dormitory for girls and boys.

To remember the volunteers by, a giant canvas with a tree-like image was created for the school. Forming the leaves of the tree were green thumb prints of student volunteers who helped construct the school. The tree-like image is a symbolic reminder of the mental, physical, and spiritual growth that occurs for each student at ETAM.

The local mayor, representatives from South America’s Adventist church division, local union and conferences, and UNASP, expressed thanks to the students, ADRA Connections, and ADRA Brazil for the time and effort contributed. UNASP’s president, Martin Kuhn, also promised that a distance-learning program would be implemented at ETAM should the mayor help the school get internet connection. Both Kuhn and the mayor shook hands in agreement.

“This ADRA Connections experience was wonderful for me, and I am happy to be part of a trip where I helped others in a significant way,” says Barajas, “Back home, I’d tell my friends to consider doing a volunteer trip to disconnect from the world. Take the focus off yourself and go serve others.”

Porto was also deeply moved by the two-week excursion. “Being with ADRA Connections has given me a different perspective in life,” she says, “I see how people who live with so little don’t complain. I’ve also learned that we don’t need many things to make us happy and that God can use me in ways I can’t imagine, you just have to make yourself available to him.”

Closing out the inauguration ceremony was Hearly Mayr, ADRA’s senior director of marketing and public relations, who introduced the donor who sold the land on which the school was built, and thanked him for his continued support to the school and the children. When asked how he felt about seeing the school finally built, the donor replied, “The dream is finally a reality!”

Students were then given a rousing charge by Adam Wamack, ADRA Connections manager, to take an oath of commitment to always serve even while at home, studying at school, and while working in their communities.

“These extreme trips will continue every summer for young adults to look forward to,” says Wamack, “We want young people to travel and explore the world, be introduced to new cultures, establish long-term connections, and learn the importance of serving others without expecting anything in return.”

“I came to the Amazon to make a difference and was not disappointed. The smiles on the kids’ faces made the trip worthwhile, I will definitely join another one,” says Carlos Piedra, a pre-physical therapy student at Pacific Union College in California.

To see what trips are scheduled next or for more information about ADRA Connections, visit ADRAConnections.org.